This post proposes the term Facade Test for an automated test which is more than a unit test, but not quite an integration test.

There are several definitions of what a unit test is, but the one that I personally prefer goes something like this:

A unit test is an automated test that tests a unit in isolation.

This is still a rather loose definition. What's a unit? What's does isolation mean? The answers to these questions seem to be a bit fluffy, but I think it's safe to say that a unit isn't bigger than a class. It's not a library (or 'assembly' in .NET terms). It's not all types in a namespace. In my opinion, a unit is a method... and a bit more. In OO, a method is coupled to it's defining class, which is the reason why I think of a unit as a bit more than a method.

If that's a unit, then isolation means that you should be able to test the unit without using or relying on any other moving pieces of production code.

Often, unit testing means that you have to decouple objects in order to achieve isolation. There's a few ways to do that, but Dependency Injection is a very common approach. That often leads to heavy use of dynamic mocks and too many interfaces that exist exclusively to support unit testing.

Sometimes, a good alternative is to write automated tests that exercise a larger group of classes. When all the collaborating classes are deterministic and implemented within the same library, this can be an effective approach. Krzysztof Koźmic describes that

Windsor, has very few unit tests. Most tests there are (and we have close to 1000 of them) exercise entire container with no part stubbed out in simulations of real life scenarios

Another example is AutoFixture, which has hundreds of automated tests against the Fixture class.

We need a name for tests like these. While we could call them Integration Tests, this label would lump them together with tests that exercise several libraries at once.

To distinguish such tests from Unit Tests on the one side, and Integration Tests on the other side, I suggest the name Facade Test 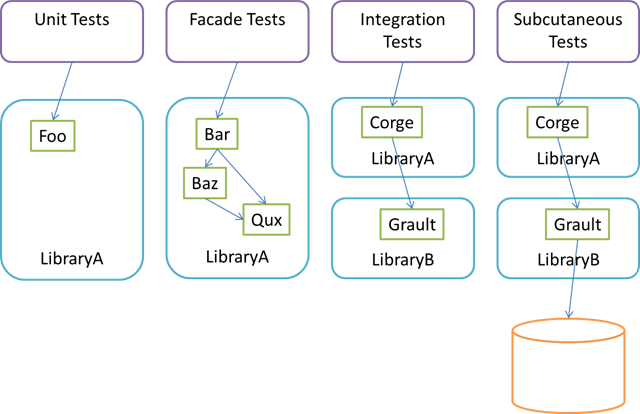 The reason why I suggest the term Facade Test is that such automated tests tend to mostly target a small subset of classes that act as Facades over many other classes in a library.

matthewr
I prefer Composite Tests or even Group Tests.
Bill Watson
We break it down like this.

Unit test: usually just one class but occasionally a couple of closely related classes, constructed and executed directly from the test code. Runs fast and no contact with the outside world.

Scenario test: multiple classes, but with all external dependencies replaced with test doubles (e.g. no database access, no SOAP calls, no HTTP requests). Object graph is constructed via the same mechanism as the real object graph. So in some sense this tests the DI configuration. This is a form of integration test, but everything runs in memory so they are quick. Most of our tests are at this level.

And then there is manual testing.

Rory Primrose
I like the term component test for this level of scope. That being said, I still put it in a project suffixed with .UnitTests.
Amir Rajan
Why differentiate at all? I test is valuable or it isn't. A tests is fast or it isn't. Thoughts?
Mark Seemann
The purpose is to have a pattern language for automated tests - just as with every other pattern language.