How to create a pure F# ASP.NET Web API project by Mark Seemann

How to create a single F# project for an ASP.NET Web API, without using an auxiliary C# or VB host project.

Implementing an ASP.NET Web API service in F# is a relatively well-described process, but everywhere I look, it seems that people are relying on a (Humble) C# Web Project to act as a host for a library written in F#. You can use an online Visual Studio template, or you can do this by hand - it's not particularly difficult. Where's the challenge in that?

Partly in a quest to demonstrate that F# is a general-purpose language, and partly just to see if it can be done, I wanted to create a pure F# ASP.NET Web API project, without relying on a C# host project. Most people on Twitter advised against it because there's no F# support for Razor, *.aspx, or *.cshtml. However, that's not a concern for a Web API, since it's not going to generate HTML anyway.

"not trivial but doable"

That turns out to be quite an accurate description. Here's how.

The first thing I did was to create a normal F# library project. 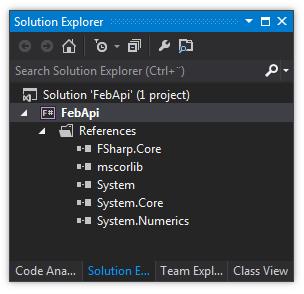 As you can see, there's nothing in that project yet.

Turn the project into a Web Project #

In contrast to C# and VB, there's no built-in F# Web Project template. However, in order to work with a web project in Visual Studio 2012, it helps if the project is a 'real' Web Project, because it means that you can launch it in IIS Express, and such things.

Because there's no built-in Web Project template for F#, I'm not aware of a nice way to do this through the Visual Studio UI, but you can open your .fsproj file in an text editor and hand-edit it. In order to turn my project into a Web Project, I added this line of code to my .fsproj file (just below the Project/PropertyGroup/ProjectGuid element):

This isn't entirely without drawbacks (that I'll get to in a minute), but you can now reload the project in Visual Studio, and you actually have an F# Web Project.

One of the things you can do with a Web Project is to right-click in Solution Explorer and select "Use IIS Express...", so I did that.

In order to use the ASP.NET Web API, you'll need to add the appropriate dependencies. I did that by adding the Microsoft.AspNet.WebApi.WebHost NuGet package.

One of the disadvantages of creating an F# Web Project is that it's an unknown combination, so you can't add anything to the project: 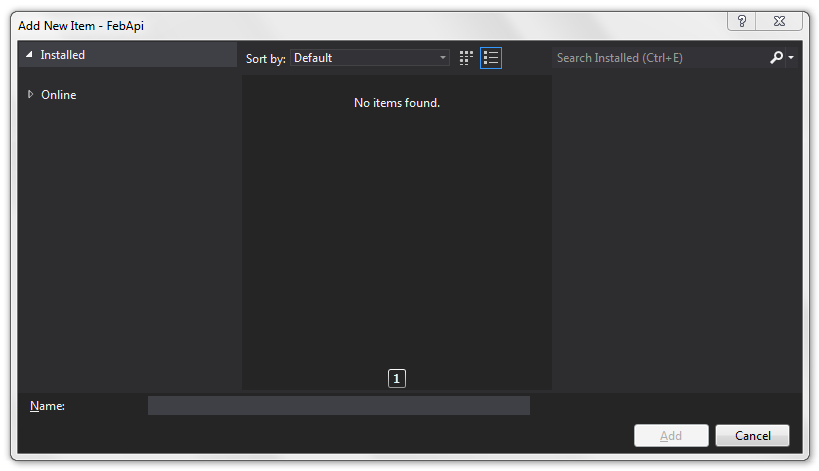 The default output folder for the debug build is "bin\Debug". Although I'm not sure whether this is strictly necessary, I changed it to "bin" because that's how C# Web Projects work...

In order to be able to derive a Global class from System.Web.HttpApplication, I added a reference to System.Web. This is a BCL library, so I added it by using the old-fashioned Add reference menu item (instead of using NuGet).

Next, I added a Global.asax file with this content:

The class Ploeh.Samples.FebApi.Global doesn't exist yet, so if you try to run the site at this stage, it's going to fail.

In order to add the Ploeh.Samples.FebApi.Global class, I wrote the first F# code in the project:

The site still can't run, but at least now it doesn't complain about a missing Global class.

The next step was to add a default Web API route:

At this point, you actually have an ASP.NET Web API site, because now, when you attempt to run the site, you get this error message:

Which is great, because this is known territory.

Of course, it doesn't do anything yet, so when you browse to the API, you get this (entirely expected) error message:

The requested resource does not support http method 'GET'.

This problem is easy to solve:

Now, when browsing to the API, you get something like this:

Success, of a sort!

This Web API now runs in IIS Express on my local machine. However, at this point, it still doesn't run in an Azure Web Site (which is something I also wanted to enable), but I'll cover how to do that in a future post.

Update 2013.19.12: It turns out that it's possible to hack the registry to make it possible to add standard F# project items to the project.

Update 2014.02.17: Since I wrote this article, new F# templates are now available for Visual Studio, including a template for F# ASP.NET MVC 5 and Web API 2 projects.

This is so awesome!

One note: For adding a new file, I simply used Ctrl+N (i.e. File>New) to create a file in the Miscellaneous Files meta solution folder. I saved the file in the physical project folder, then in Solution Explorer I dragged it's icon from the Miscellaneous Files folder onto the F# Project node. Voila! New code file. Not as easy as it should be, but easier than unloading the project to edit the fsproj file.

Another option is to create the file in the file system (with Windows Explorer, or your preferred shell), and then add the existing file to the project.