An Abstract Factory is one of the workhorses of Dependency Injection, although it's a somewhat blunt instrument. As I've described in chapter 6 of my book, whenever you need to map a run-time value to an abstraction, you can use an Abstract Factory. However, often there are more sophisticated options available.

Still, it can be a useful pattern, but you have to understand where to define it, and where to implement it. One of my readers ask:

"how would deal with abstract factories if a module needs to be reused across multiple hosts/agg roots?Should each root have its fact?

These are good question that deserve a more thorough treatment than a tweet in reply.

Based on the above questions, I imagine that the situation can be depicted like this: 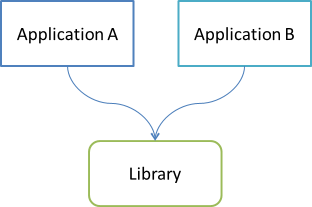 Two or more applications share a common library. These applications may be a web service and a batch job, a web site and a mobile app, or any other combination that makes sense to you.

Sometimes, the Abstract Factory is a non-generic interface; sometimes it takes more than a single parameter; often, the parameter(s) have stronger types than object.

Where do interfaces go?

From Agile Principles, Patterns, and Practices, chapter 11, we know that the Dependency Inversion Principle means that "clients [...] own the abstract interfaces". This makes sense, if you think about it.

Imagine that the (shared) library defines a concrete class Foo that takes three values in its constructor:

Why would the library ever need to define an interface like the following?

It could, but what would be the purpose? The library itself doesn't need the interface, because the Foo class has a nice constructor it can use.

Often, the Abstract Factory pattern is most useful if you have some of the values available at composition time, but can't fully compose the object because you're waiting for one of the values to materialize at run-time. If you think this sounds abstract, my article series on Role Hints contains some realistic examples - particularly the articles Metadata Role Hint, Role Interface Role Hint, and Partial Type Name Role Hint.

A client may, for example, wait for the bar value before it can fully compose an instance of Foo. Thus, the client can define an interface like this:

This makes sense to the client, but not to the library. From the library's perspective, what's so special about bar? Why should the library define the above Abstract Factory, but not the following?

Such Abstract Factories make no sense to the library; they are meaningful only to their clients. Since the client owns the interfaces, they should be defined together with their clients. A more detailed diagram illustrates these relationships: 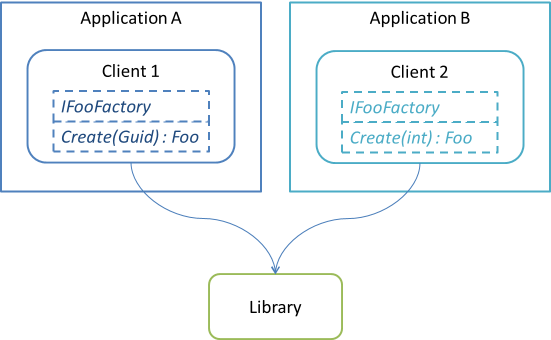 While I've previously described how to implement an Abstract Factory, I may then have given short shrift to the topic of where to put the implementation.

Perhaps a bit surprising, this (at least partially) depends on the return type of the Abstract Factory's Create method. In the case of both IFooFactory definitions above, the return type of the Create methods is the concrete Foo class, defined in the shared library. This means that both Client 1 and Client 2 already depends on the shared library. In such situations, they can each implement their Abstract Factories as Manually Coded Factories. They don't have to do this, but at least it's an option.

The third party that ultimately implements these interfaces is often the Composition Root. If this is the case, other implementation options are Container-based Factories or Dynamic Proxies.

In order to answer the initial question: my default approach would be to implement the Abstract Factory multiple times, favouring decoupling over DRY. These days I prefer Pure DI, so I'd tend to go with the Manually Coded Factory.

Still, this answer of mine presupposes that Abstract Factory is the correct answer to a design problem. Often, it's not. It can lead to horrible interfaces like IFooManagerFactoryStrategyFactoryFactory, so I consider Abstract Factory as a last resort. Often, the Metadata, Role Interface, or Partial Type Name Role Hints are better options. In the degenerate case where there's no argument to the Abstract Factory's Create method, a Decoraptor is worth considering.

This article explains the matter in terms of relatively simple dependency graphs. In general, dependency graphs should be shallow, but if you want to learn about principles for composing more complex dependency graphs, Agile Principles, Patterns, and Practices contains a chapter on Principles of Package and Component Design (chapter 28) that I recommend.