There are many ways to represent an argument list. An overview for object-oriented programmers.

Most programming languages enable you to pass arguments to operations. In C# and Java, you declare methods with a list of arguments:

Here, baz and qux are arguments to the Bar method. Together, the arguments for a method is called an argument list. To be clear, this isn't universally adopted terminology, but is what I'll be using in this article. Sometimes, people (including me) say parameter instead of argument, and I'm not aware of any formal specification to differentiate the two.

While you can pass arguments as a flat list, you can also model them as parameter objects or tuples. These representations are equivalent, because lossless translations between them exist. We say that they are isomorphic.

In theory, you can declare a method that takes thousands of arguments. In practice, you should constrain your design to as few arguments as possible. As Refactoring demonstrates, one way to do that is to Introduce Parameter Object. That, already, teaches us that there's a mapping from a flat argument list to a Parameter Object. Is there an inverse mapping? Do other representations exist? 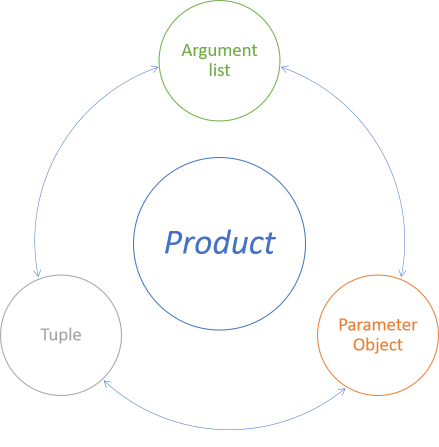 There's at least three alternative representations of a group of arguments:

The central concept that they all seem to orbit is what in category theory is known as a product. In the theory of algebraic data types, this is known as a product type. In short, a product type is a composite of elements, where each element can vary independently of the other elements. For more details, I can recommend Tomáš Petříček's introduction to the subject: Power of mathematics: Reasoning about functional types.

Perhaps the best-known mapping from an argument list is the Introduce Parameter Object refactoring described in Refactoring.

Since the refactoring is described in detail in the book, I don't want to repeat it all here, but in short, assume that you have a method like this:

In this case, the method only has two arguments, so the refactoring may not be necessary, but that's not the point. The point is that it's possible to refactor the code to this:

In Refactoring, the recipe states that you should make the class immutable, and while that's a good idea (I recommend it!), it's technically not necessary in order to perform the translation, so I omitted it here in order to make the code simpler.

You're probably able to figure out how to translate back again. We could call this refactoring Dissolve Parameter Object:

You can go back and forth between a 'flat' argument list and a Parameter Object without loss of information, so these two refactorings together form an isomorphism.

As an example, consider the Roster example from a previous article. The Combine method on the Roster class is implemented like this:

This method takes an object as a single argument. You can think of this Roster object as a Parameter Object.

If you like, you can add a method overload that dissolves the Roster object to its constituent values:

In this incarnation, the dissolved method overload creates a new Roster from its argument list and delegates to the other overload. This is, however, an arbitrary implementation detail. You could just as well implement the two methods the other way around:

In this variation, the overload that takes three arguments contains the implementation, whereas the Combine(Roster) overload simply delegates to the Combine(int, int, string[]) overload.

In order to illustrate the idea that both APIs are equivalent, in this example I show two method overloads side by side. The overall point, however, is that you can translate between such two representations without changing the behaviour of the system. You don't have to keep both method overloads in place together.

As a data type, a linked list can hold an arbitrary number of elements. (In Haskell, it can even be infinite, because Haskell is lazily evaluated.) Statically typed languages like F# and Haskell add the constraint that all elements must have the same type.

An argument list like (Qux qux, Corge corge) isn't at all a statically typed linked list. Neither does it have an arbitrary size nor does it contain elements of the same type. On the contrary, it has a fixed length (two), and elements of different types. The first element must be a Qux value, and the second element must be a Corge value.

Surprisingly, Haskell may provide the most digestible illustration of that, even if you don't know how to read Haskell syntax. Suppose you have the values qux and corge, of similarly named types. Consider a C# method call Baz(qux, corge). What's the type of the 'argument list'?

We know that the argument list/tuple isomorphism exists, because that's how the F# compiler works. F# is a multi-paradigmatic language, and it can interact with C# code. It does that by treating all C# argument lists as tuples. Consider this example of calling Math.Pow:

Programmers who still write more C# than F# often write it like that, because it looks like a method call, but I prefer to insert a space between the method and the arguments:

The reason is that in F#, function calls are delimited with space. The brackets are there in order to override the normal operator precedence, just like you'd write (1 + 2) * 3 in order to get 9 instead of 7. This is better illustrated by introducing an intermediate value:

because the brackets are now redundant. In the last two examples, t is a tuple of two floating-point numbers. All four code examples are equivalent and compile, thereby demonstrating that a translation exist from F# tuples to C# argument lists.

The inverse translation exists as well. You can see a demonstration of this in the (dormant) Numsense code base, which includes an object-oriented Façade, which defines (among other things) an interface where the TryParse method takes a tuple argument. Here's the declaration of that method:

That looks cryptic, but if you remove the [<Out>] annotation and the argument names, the method is declared as taking single input value of the type string * int byref. It's a single value, but it's a tuple (a pair).

You can see that, as I've described above, I've inserted a space between this.TryParse and (s, result), in order to highlight that this is an F# function that takes a single tuple as input.

In C#, however, you can use the method as though it had a standard C# argument list:

You'll note that this is an advanced example that involves an out parameter, but even in this edge case, the translation is possible.

C# argument lists and F# tuples are isomorphic. I'd be surprised if this result doesn't extend to other languages.

Thus, I'm not going to use more words on this isomorphism.

Another important result is that since these three ways to model arguments are isomorphic, we can treat them as interchangeable in analysis. For instance, from category theory we can learn about the properties of tuples. These properties, then, also apply to C# and Java argument lists.