A note on C# co- and contravariance, and how it relates to functors.

This article is an instalment in an article series about contravariant functors. It assumes that you've read the introduction, and a few of the examples.

If you know your way around C# you may know that the language has its own notion of co- and contravariance. Perhaps you're wondering how it fits with contravariant functors.

For the C# perspective on co- and contravariance, the official documentation is already quite good. It starts with this example of assignment compatibility:

F#, on the other hand, doesn't. If you try to do something similar in F#, it doesn't compile:

The compiler error is:

You have to explicitly use the upcast operator:

When you do that, the explicit type declaration of the value is redundant, so I removed it.

In this example, you can think of :> as a function from string to obj: string -> obj. In C#, the equivalent function would be Func<string, object>.

These functions always exist for types that are properly related to each other, upcast-wise. You can think of it as a generic function 'a -> 'b (or Func<A, B>), with the proviso that A must be 'upcastable' to B:

In my head, I'd usually think about this as A being a subtype of B, but unless I explain what I mean by subtyping, it usually confuses people. I consider anything that can 'act as' something else a subtype. So string is a subtype of object, but I also consider TimeSpan a subtype of IComparable, because that cast is also always possible:

Once again, F# is only happy if you explicitly use the :> operator:

Again, the same is true in F#, but you have to explicitly use the :> operator.

To recapitulate: C# has a built-in automatic conversion that upcasts. It's also built into F#, but here as an operator that you explicitly have to use. It's like an automatic function from subtype to supertype.

The C# documentation continues with an example of covariance: 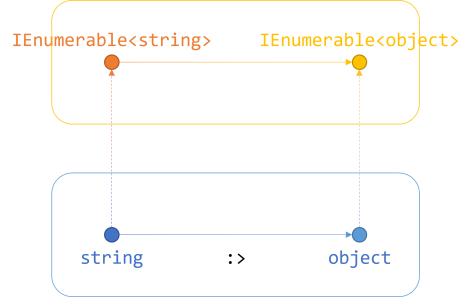 Since the C# compiler already knows that an automatic function (:>) exists that converts string to object, it can automatically convert IEnumerable<string> to IEnumerable<object>. You don't have to call Select to do this. The compiler does it for you.

How does it do that?

It looks for a little annotation on the generic type argument. For covariant types, the relevant keyword is out. And, as expected, the T in IEnumerable<T> is annotated with out:

The same is true for Func<T, TResult>, which is both covariant and contravariant:

The in keyword denotes contravariance, but we'll get to that shortly.

The reason that covariance is annotated with the out keyword is that covariant type arguments usually sit in the return-type position. The rule is actually a little more nuanced than that, but I'll again refer you to Sandy Maguire's excellent book Thinking with Types if you're interested in the details.

So far, so good. What about contravariance? The C# documentation continues its example:

The Action<T> delegate gives rise to a contravariant functor. The T is also annotated with the in keyword, since the type argument sits in the input position:

Again, let's modify the diagram from the article about contravariant functors: 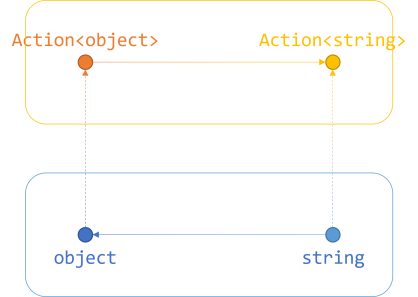 Again, since the C# compiler already knows that an automatic function exists that converts string to object, it can automatically convert Action<object> to Action<string>. You don't have to call Contramap to do this. The compiler does it for you.

It all checks out.

The C# compiler understands co- and contravariance, but while it automatically supports it, it only deals with automatic conversion from subtype to supertype. Thus, for those kinds of conversions, you don't need a Select or ContraMap method.

The functor notion of co- and contravariance is a generalisation of how the C# compiler works. Instead of relying on automatic conversions, the Select and ContraMap methods enable you to supply arbitrary conversion functions.