Functions as pipes by Mark Seemann

A recent article on types as sets briefly touched on functions as sets. For example, you can think of Boolean negation as a set of two arrows:

In general, however, functions aren't always endomorphisms. They often map one set of values to another set. How can we think of this as sets?

As was also the case with the article on types as sets, I'd like to point out that this article isn't necessarily mathematically rigorous. I'm neither a computer scientist nor a mathematician, and while I try to be as correct as possible, some hand-waving may occur. My purpose with this article isn't to prove a mathematical theorem, but rather to suggest what I, myself, find to be a useful metaphor.

Instead of visualising Boolean negation within a single set, we can also visualise it as a mapping of elements from an input set (the domain) to an output set (the codomain):

In this figure, the domain is to the left and the codomain is on the right.

How do we visualise more complex functions? What if the domain isn't the same as the codomain?

To the left, we have four pairs that each map to the Boolean values on the right.

Perhaps using only Boolean values is misleading. Even when dealing with pairs, the above example may fail to illustrate that we can think of any function as a mapping from a domain to a codomain.

How would we illustrate a function that returns true if the input is an even 3-bit number, and false otherwise? We could make a diagram like this: 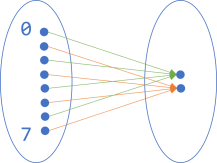 Given this illustration, I'm sure you can extrapolate to 32-bit integers and so on. It's impractical to draw, but the concept is the same.

So far, we've only looked at functions where the codomain is the set of Boolean values. How does it look with other codomains?

We could, for example, imagine a function that 'encodes' Boolean values as 3-bit numbers, false corresponding (arbitrarily) to 5 and true to 2. The diagram for that function looks like this: 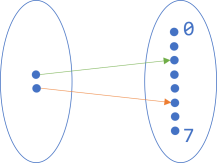 Now the set of Boolean values is on the left, with true on top.

A function as a pipe #

In all examples, we have the domain to the left and the codomain on the right, connected with arrows. Sometimes, however, we may want to think about a function as just a single thing, without all the details. After all, the diagrams in this article are simple only because the examples are toy examples. Even a simple function like this one would require a huge diagram:

So perhaps, instead, we'd like to have a way to illustrate a function without all the details, yet still retaining this set-based way of thinking.

Let's return to one of the earlier examples, but add a shape around it all: 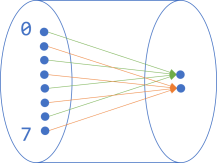 This seems like a fair addition to make. It starts to look like the function is enclosed in a pipe. Let's make the pipe opaque: 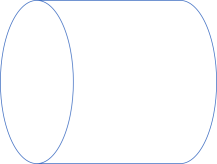 In architecture diagrams, a horizontal pipe is a common way to illustrate that some sort of data processing takes place, so this figure should hardly be surprising.

You may say that I've been cheating. After all, in a figure like the one that illustrates an isEven function, the domain is larger than the codomain, yet I've kept both ovals of the same size. Wouldn't the following be a fairer depiction?

If we try to enclose this diagram in an opaque pipe, it'd look like this: 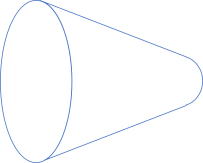 This mostly looks like a (bad) perspective drawing of a pipe, but it does start to suggest how functions fit together. For example, the output of this isEven function is the Boolean set, which is also the input of, for example the Boolean negation function (! or not). This means that if the shapes fit together, we can compose the pipes: 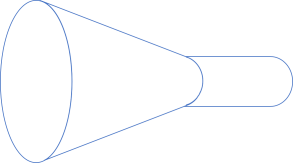 Continuing this line of thinking, we can keep on composing the shapes as long as the output fits the input of the next function. For example, the output of Boolean negation is still the Boolean set, which is also the domain of the above 'encoding' function:

We can even, if we'd like to peek into the composition, make the pipes transparent again, to illustrate what's going on:

As long as the right-hand side of one pipe fits the left-hand side of another pipe, it indicates that you can compose these two functions.

The remaining function is trivial to implement:

Since Integral is a supertype of Num, if our 3-bit number is an Integral instance, it's also a Num instance.

The composition implied by the above figure is this:

Haskell is typically read from right to left, so this composition starts with even, continues with not, and concludes with encode.

I'll leave the exegesis of composition 4 as an exercise for the reader.

In C#, imagine that an Int3 data type exists. You can now define the three functions like this:

Given a Compose extension method on Func<A, B>, you can now compose the functions like this:

This composition works just like the above Haskell example, and produces the same results.

A function takes input and returns output. Even if the function takes multiple arguments, we can think of an argument as a single object: a tuple or Parameter Object.

This visual metaphor works for object-oriented programming as well. With sufficient mental gymnastics, functions are isomorphic to methods, so the pipe metaphor works beyond pure functions.