Can one flatten a statically typed list? by Mark Seemann

What would be the type of a heterogeneously nested list?

Once again, I (inadvertently) managed to start a discussion on Twitter about static versus dynamic typing. I've touched on the topic before, but my agenda is not to fan any flames - quite the contrary. I'm trying (nay, struggling) to understand the other side of the debate.

This post isn't really about that, though, but in one of the threads spawned by my original tweet, Tom Johnson wrote:

"One of my favourite examples:

The type, it turns out, is straightforward.

I'd like to be explicit about my agenda when writing this article. I'm not doing this to prove Tom Johnson wrong. In fact, I get the sense that he already knows the answer. Rather, I found it an interesting little exercise.

Instead, I'll use a data structure that represents the same data, but in a more verbose manner.

In one of the Twitter threads, Alexis King already gave the answer:

"`flatten` is perfectly possible in Haskell, you just have to write a rose tree datatype, not use `[a]`."

The standard Tree a in Data.Tree, however, doesn't seem to quite fit. Instead, we can use a rose tree. As Meertens wrote:

"We consider trees whose internal nodes may fork into an arbitrary (natural) number of sub-trees. (If such a node has zero descendants, we still consider it internal.) Each external node carries a data item. No further information is stored in the tree; in particular, internal nodes are unlabelled." 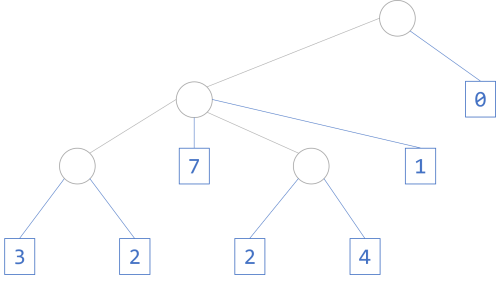 I'll use the Tree data type introduced in the article Picture archivist in Haskell:

If you would, you could define a type alias that has unlabelled internal nodes:

I'm not really going to bother doing that, though. I'm just going to create a Tree () b value.

You could probably come up with a more succinct syntax to create trees like this in code, but I'm assuming that in 'reality', if you have the need to flatten nested lists, it'll be a values that arrive at the boundary of the application...

Yes, no problem. The Tree a b data type is an instance of various type classes, among these Foldable:

You can see the full definition of bifoldMap and its dependencies in the article that introduces the type.

One of the functions available via Foldable is toList, which is just what you need:

This is the result required by Tom Johnson.

Likewise, the type of the requested flatten function is toList :: Foldable t => t a -> [a].

He appears to be using JavaScript and the solution is trivial in TypeScript, so he must not have looked too hard before claiming that statically typed languages cannot handle this scenario. He also kept moving the goalposts (It needs to use list syntax! It needs to support heterogeneous lists!), but even the most naïve attempt in TypeScript handles those as well.

TypeScript types can also maintain the order of the types of elements in the flattened list. How to flatten a tuple type in TypeScript? gives a solution capable of handling that, though it is certainly more complex than the version above.