Once in a while, someone comes up with the idea that it would be great to introduce a common abstraction over various DI Containers in .NET. My guess is that part of the reason for this is that there are so many DI Containers to choose from on .NET:

... and these are just the major ones; there are many more! Hiding all these different libraries behind a common interface sounds like a smashing idea, but isn't.

At its core, a Conforming Container introduces a central interface, often called IContainer, IServiceLocator, IServiceProvider, ITypeActivator, IServiceFactory, or something in that vein. The interface defines one or more methods called Resolve, Create, GetInstance, or similar:

Sometimes, the interface defines only a single of those methods; sometimes, it defines even more variations of methods to create objects based on a Type.

Some Conforming Containers stop at this point, so that the interface only exposes Queries, which means that they only cover the Resolve phase of the Register Resolve Release pattern. Other efforts attempt to address Register phase too:

The intent is to enable configuration of the container using some sort of metadata. Sometimes, the methods have more advanced configuration parameters that also enable you to specify the lifestyle of the service, etc.

Notice that in this example, not all major .NET DI Containers are listed. This is a typical situation. Obviously, since the entire effort is to define an interface, contributors are often invited to provide Adapters for missing DI Containers.

A Conforming Container is an anti-pattern, because it's

a commonly occurring solution to a problem that generates decidedly negative consequences,

A code base using a Conforming Container may have code like this all over the place:

This breaks encapsulation, because it's impossible to identify a class' collaborators without reading its entire code base.

Additionally, concrete DI Containers have distinct feature sets. Although likely to be out of date by now, this feature comparison chart from my book illustrate this point:

This is only a simple chart that plots the most common features of DI Containers. Each DI Container has dozens of features - many of them unique to that particular DI Container. A Conforming Container can either support an intersection or union of all those features. 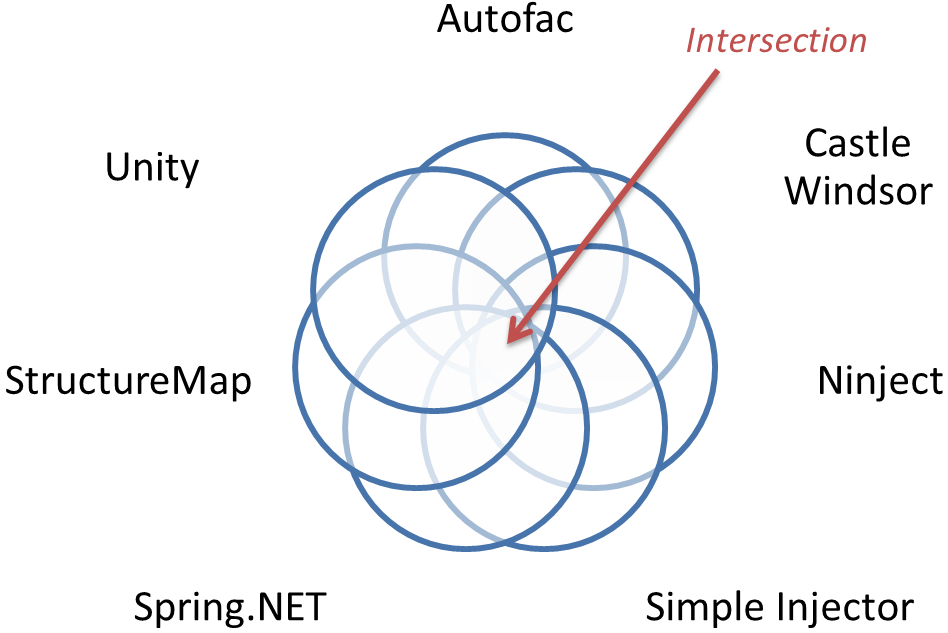 A Conforming Container that targets the union of all features is guaranteed to consist mostly of a multitude of NotImlementedExceptions, or, put in another way, massively breaking the Liskov Substitution Principle.

The typical causes of the Conforming Container anti-pattern are:

The root cause is always a lack of awareness of a simpler solution.

There are no cases known to me where a Conforming Container is a good solution to the problem at hand. There's always a better and simpler solution.

Instead of relying on the Service Locator anti-pattern, all collaborating classes should rely on the Constructor Injection pattern:

This leaves all options open for any code consuming the CorrectClient class. The only exception to relying on Constructor Injection is when you need to compose all these collaborating classes. The Composition Root has the single responsibility of composing all the objects into a working object graph:

In this example, the final graph is rather shallow, but it can be as complex and deep as necessary. This Composition Root uses hand-coded composition, but if you want to use a DI Container, the Composition Root is where you put it:

In all but the most trivial of applications, the Composition Root is only an extremely small part of the entire application. 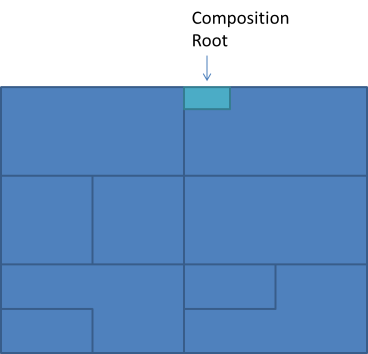 (The above picture is meant to illustrate an arbitrary application architecture; it could be layered, onion, hexagonal, or something else - it doesn't really matter.) If you want to replace one DI Container with another DI Container, you only replace the Composition Root; the rest of the application will never notice the difference.

Notice that only applications should have Composition Roots. Libraries and frameworks should not.

These solutions are better than a Conforming Container because they are simpler, have fewer moving parts, are easier to understand, and easier to reason about.

Sometimes the Conforming Container only defines a Service Locator-like API, and sometimes it also defines a configuration API. That configuration API may include various axes of configurability, most notably lifetime management and decommisioning.

Decommissioning is often designed around the concept of a disposable 'context' scope, but as I explain in my book, that's not an extensible pattern.

There are various known examples of Conforming Containers for .NET:

Additionally, it looks like the new Dependency Injection support for ASP.NET is taking this route as well, although hopefully, it's not too late to change that.