A functor is a common abstraction. While typically associated with functional programming, functors exist in C# as well.

Programming is about abstraction, since you can't manipulate individual sub-atomic particles on your circuit boards. Some abstractions are well-known because they're rooted in mathematics. Particularly, category theory has proven to be fertile ground for functional programming. Some of the concepts from category theory apply to object-oriented programming as well; all you need is generics, which is a feature of both C# and Java.

In previous articles, you got an introduction to the specific Test Data Builder and Test Data Generator functors. Functors are more common than you may realise, although in programming, we usually work with a subset of functors called endofunctors. In daily speak, however, we just call them functors.

In the next series of articles, you'll see plenty of examples of functors, with code examples in both C#, F#, and Haskell. These articles are mostly aimed at object-oriented programmers curious about the concept.

This list is far from exhaustive; more functors exist. Perhaps the most well-known of all functors is List, a.k.a. Sequence. C# query syntax can handle any functor, but most people only think of it as a language feature related to IEnumerable<T>. Since the combination of IEnumerable<T> and query syntax is already well-described, I'm not going to cover it explicitly here.

If you understand how LINQ, IEnumerable<T>, and C# query syntax works, however, all other functors should feel intuitive. That's the power of abstractions.

The purpose of this article isn't to give you a comprehensive introduction to the category theory of functors. Rather, the purpose is to give you an opportunity to learn how it translates to object-oriented code like C#. For a great introduction to functors, see Bartosz Milewski's explanation with illustrations. 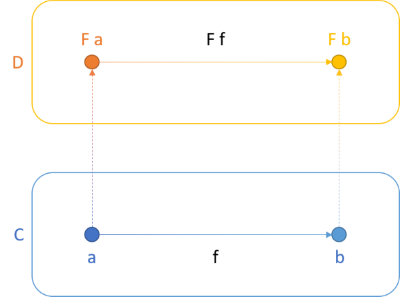 Not only does F map a from C to F a in D (and likewise for b), it also maps the function f to F f. Functors preserve the structure between objects. You'll often hear the phrase that a functor is a structure-preserving map. One example of this regards lists. You can translate a List<int> to a List<string>, but the translation preserves the structure. This means that the resulting object is also a list, and the order of values within the lists doesn't change.

Fundamentally, you must be able to implement a method for your generic type that looks like this:

Here, I've defined the Select method as an instance method on a class called Functor<T>, but often, as is the case with IEnumerable<T>, the method is instead implemented as an extension method. You don't have to name it Select, but doing so enables query syntax in C#:

Here, source is a Functor<int> object.

If you don't name the method Select, it could still be a functor, but then query syntax wouldn't work. Instead, normal method-call syntax would be your only option. This is, however, a specific C# language feature. F#, for example, has no particular built-in awareness of functors, although most libraries name the central function map. In Haskell, Functor is a typeclass that defines a function called fmap.

The common trait is that there's an input value (Functor<T> in the above C# code snippet), which, when combined with a mapping function (Func<T, TResult>), returns an output value of the same generic type, but with a different generic type argument (Functor<TResult>).

Defining a Select method isn't enough. The method must also obey the so-called functor laws. These are quite intuitive laws that govern that a functor behaves correctly.

In C#, you can write a demonstration of the law as a unit test:

While this doesn't prove that the first law holds for all values and all generic type arguments, it illustrates what's going on.

Since C# doesn't have a built-in identity function, the test creates a specialised identity function for integers, and calls it id. It simply returns all input values unchanged. Since id doesn't change the value, then Select(id) shouldn't change the functor, either. There's nothing more to the first law than this.

The second law states that if you have two functions, f and g, then mapping over one after the other should be the same as mapping over the composition of f and g. In C#, you can illustrate it like this:

Here, g is a function that translates an int to a string, and f reverses a string. Since g returns string, you can compose it with f, which takes string as input.

This is not a monad tutorial; it's a functor tutorial. Functors are commonplace, so it's worth keeping an eye out for them. If you already understand how LINQ (or similar concepts in Java) work, then functors should be intuitive, because they are all based on the same underlying maths.

While this article is an overview article, it's also a part of a larger series of articles that explore what object-oriented programmers can learn from category theory.

Next: The Maybe functor.

Philip Schwarz
For anyone interested in an aid to internalising functor laws, check out the first four diagrams of the following slide deck, which summarise the laws (in category-theoretic terms) and show an example of the laws in action for a functor from one monoid to another: Functor Laws
Tyson Williams

As a rule of thumb, if you have a type with a generic type argument, it's a candidate to be a functor.

My guess is that you were thinking of Haskell's Functor typeclass when you wrote that. As Haskell documentation for Functor says,

An abstract datatype f a, which has the ability for its value(s) to be mapped over, can become an instance of the Functor typeclass.

To explain the Haskell syntax for anyone unfamiliar, f is a generic type with type parameter a. So indeed, it is necessary to be a Haskell type to be generic to be an instance of the Functor typeclass. However, the concept of a functor in programming is not limited to Haskell's Functor typeclass.

For any type T including non-generic types, the category containing only a single object representing T can have (nontrivial) endofunctors. For example, consider a record of type R in F# with a field of both name and type F. Then let mapF f r = { r with F = f r.F } is the map function the satisfies the functor laws for the field F for record R. This holds even when F is not a type parameter of R. I would say that R is a functor in F.

I have realized within just the past three weeks how valuable it is to have a map function for every field of every record that I define. For example, I was able to greatly simplify the SubModelSeq sample in Elmish.WPF in part because of such map functions. I am especially pleased with the main update function, which heavily uses these map functions. It went from this to this.

In particular, I was able to eta-reduce the Model argument. To be clear, the goal is not point-free style for its own sake. Instead, it is one of perspective. In the previous implementation, the body explicitly depended on both the Msg and Model arguments and explicitly returned a Model instance. In the new implementation, the body only explicitly depends on the Msg argument and explicitly returns a function with type Model -> Model. By only having to pattern match on the Msg argument (and not having to worry about how to exactly map from one Model instance to the next), the implementation is much simpler. Such is the expressive power of high-order functions.

All this (and much more in my application at work) from realizing that a functor doesn't have to be generic.

I am looking into the possibility of generating these map functions using Myrid.

Tyson, thank you for writing. I think that you're right.

To be honest, I still find the category theory underpinnings of functional programming concepts to be a little hazy. For instance, in category theory, a functor is a mapping between categories. When category theory is translated into Haskell, people usually discuss Haskell as constituting a single large category called Hask. In that light, everything that goes on in Haskell just maps from objects in Hask to objects in Hask. In that light, I still find it difficult to distinguish between morphisms and functors.

I'm going to need to think about this some more, but my intuition is that one can also find 'smaller' categories embedded in Hask, e.g. the category of Boolean values, or the category of strings, and so on.

What I'm trying to get across is that I haven't thought enough about the boundaries of a concept such as functor. It's clear that some containers with generic types form functors, but are generics required? You argue that they aren't required, and I think that you are right.

Generics are, however, required at the language level, as you've also pointed out. I think that this is also the case for F# and C#, but I admit that since the thought hadn't crossed my mind until now, I actually don't know. If you define a Select method that takes a Func<T, T> instead of a Func<T, TResult>, does query syntax still work?

For what it's worth, there's a Haskell library that defines some type classes for monomorphic containers, including MonoFunctor. As it claims:

"All of the laws for the polymorphic typeclasses apply to their monomorphic cousins."

This strongly suggests that MonoFunctor instances are functors, too.

I agree that despite the brevity of copy-and-update expressions, the particular use case that you describe can still seem verbose to sensitive souls. It doesn't look too bad with the example you give (r.F), but usually, value and field names are longer, and then reading the field, applying a function, and setting the field again starts to feel inconvenient. I've been there.

Once you start down the path of wanting to make it easier to 'reach into' a record structure to update parts of it, you quickly encounter lenses. As far as I can tell, your map function looks equivalent to a function that the lens library calls over.

I agree that lenses can solve some real problems, and it seems that your use case was one of them.

FWIW, I recently answered a Stack Overflow question about the presence of general functors in programming. Perhaps you'll find it useful.