Set is not a functor by Mark Seemann

This article is an instalment in an article series about functors. The way functors are frequently presented to programmers is as a generic container (Foo<T>) equipped with a translation method, normally called map, but in C# idiomatically called Select.

It'd be tempting to believe that any generic type with a Select method is a functor, but it takes more than that. The Select method must also obey the functor laws. This article shows an example of a translation that violates the second functor law.

The .NET Base Class Library comes with a class called HashSet<T>. This generic class implements IEnumerable<T>, so, via extension methods, it has a Select method.

Unfortunately, that Select method isn't a structure-preserving translation of sets. The problem is that it treats sets as enumerable sequences, which implies an order to elements that isn't part of a set's structure.

In order to understand what the problem is, consider this xUnit.net test:

This test creates two sets, and by using a Guard Assertion demonstrates that they're equal to each other. It then proceeds to Select over both sets, using the identity function id. The return values aren't HashSet<T> objects, but rather IEnumerable<T> sequences. Due to an implementation detail in HashSet<T>, these two sequences are different, because they were populated in reverse order of each other.

The problem is that the Select extension method has the signature IEnumerable<TResult> Select<T, TResult>(IEnumerable<T>, Func<T, TResult>). It doesn't operate on HashSet<T>, but instead treats it as an ordered sequence of elements. A set isn't intrinsically ordered, so that's not the translation you need.

To be clear, IEnumerable<T> is a functor (as long as the sequence is referentially transparent). It's just not the functor you're looking for. What you need is a method with the signature HashSet<TResult> Select<T, TResult>(HashSet<T>, Func<T, TResult>). Fortunately, such a method is trivial to implement:

This extension method offers a proper Select method that translates one HashSet<T> into another. It does so by enumerating the elements of the set, then using the Select method for IEnumerable<T>, and finally wrapping the resulting sequence in a new HashSet<TResult> object.

This is a better candidate for a translation of sets. Is it a functor, then?

Even though HashSet<T> and the new Select method have the correct types, it's still only a functor if it obeys the functor laws. It's easy, however, to come up with a counter-example that demonstrates that Select violates the second functor law.

Consider a pair of conversion methods between string and DateTimeOffset:

The first method, ParseDateTime, converts a string into a DateTimeOffset value. It tries to parse the input, and returns the corresponding DateTimeOffset value if this is possible; for all other input values, it simply returns DateTimeOffset.MinValue. You may dislike how the method deals with input values it can't parse, but that's not important. In order to prove that sets aren't functors, I just need one counter-example, and the one I'll pick will not involve unparseable strings.

The FormatDateTime method converts any DateTimeOffset value to an ISO 8601 string.

The DateTimeOffset type is the interesting piece of the puzzle. In case you're not intimately familiar with it, a DateTimeOffset value contains a date, a time, and a time-zone offset. You can, for example create one like this:

This value clearly contains different constituent elements, but it does represent the same instant in time. This is how DateTimeOffset implements Equals. These two object are considered equal, as the following test will demonstrate.

In a sense, you could argue that there's some sense in implementing equality for DateTimeOffset in that way, but this unusual behaviour provides just the counter-example that demonstrates that sets aren't functors:

This passing test provides the required counter-example. It first creates two ISO 8601 representations of the same instant. As the Guard Assertion demonstrates, the corresponding DateTimeOffset values are considered equal.

In the act phase, the test creates a set of these two strings. It then performs two round-trips over DateTimeOffset and back to string. The second functor law states that it shouldn't matter whether you do it in one or two steps, but it does. Assert.False passes because l is not equal to r. Q.E.D.

The problem is that sets only contain one element of each value, and due to the way that DateTimeOffset interprets equality, two values that both represent the same instant are collapsed into a single element when taking an intermediary step. You can illustrate it like this: 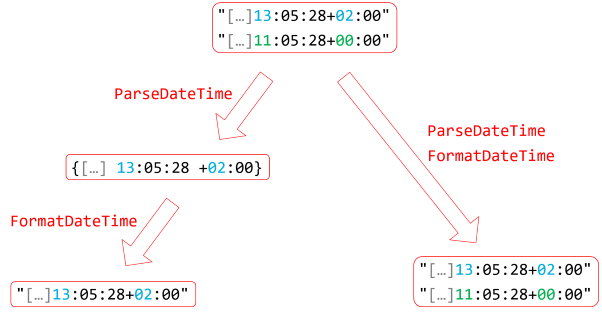 In this illustration, I've hidden the date behind an ellipsis in order to improve clarity. The date segments are irrelevant in this example, since they're all identical.

On the other hand, when you map the input set without an intermediary set, each string value is first converted into a DateTimeOffset value, and then immediately thereafter converted back to a string value. Since the two resulting strings are different, the resulting set contains two values.

Which of these paths is correct, then? Both of them. That's the problem. When considering the semantics of sets, both translations produce correct results. Since the results diverge, however, the translation isn't a functor.

2019-01-09. There's been some controversy around this post, and more than one person has pointed out to me that the underlying reason that the functor laws are violated in the above example is because DateTimeOffset behaves oddly. Specifically, its Equals implementation breaks the substitution property of equality. See e.g. Giacomo Citi's response for details.

The term functor originates from category theory, and I don't claim to be an expert on that topic. It's unclear to me if the underlying concept of equality is explicitly defined in category theory, but it wouldn't surprise me if it is. If that definition involves the substitution property, then the counter-example presented here says nothing about Set as a functor, but rather that DateTimeOffset has unlawful equality behaviour.

The Problem here is not the HashSet, but the DateTimeOffset Class. It defines Equality loosely, so Time-Comparison is possible between different Time-Zones. The Functor Property can be restored by applying a stricter Equality Comparer like this one:

As for preserving Referential Transparency, the Distinction between Equality and Identity is important. By Default, Classes implement 'Equals' and '==' using ReferenceEquals which guarantees Substitution. Structs don't have a Reference unless they are boxed, instead they are copied and usually have Value Semantics. To be truly 'referentially transparent' though, Equality must be based on ALL Fields. When someone overrides Equals with a weaker Equivalence Relation than ReferenceEquals, it is their Responsibility to preserve Substitution. No Library Author can cover all possible application cases for HashSet.
Mark Seemann

Matt, thank you for writing. DateTimeOffset already defines the EqualsExact method. Wouldn't it be easier to use that?

In order to prove that sets aren't functors, I just need one counter-example, and the one I'll pick will not involve unparseable strings.

In context, you are correct; you can pick whatever example you want to create a counter-example. However, your counter-example does not prove that HashSet<> is not a functor.

Your counter-example shows that the type HashSet<> and your function that you called Select is not a functor. Your Select function uses this constructor overload of HashSet<>, which eventually uses EqualityComparer<T>.Default in places like here and here. The instance of EqualityComparer<DateTimeOffset>.Default implements its Equals method via DateTimeOffset.Equals. The comments by Giacomo Citi and others explained "why" your Select function (and the type HashSet<>) doesn't satisfy the second functor law: you picked a constructor overload of HashSet<> that uses an implementation of IEqualityComparer<DateTimeOffset> that depends on DateTimeOffset.Equals, which doesn't satisfy the substitution property.

The term functor originates from category theory, and I don't claim to be an expert on that topic. It's unclear to me if the underlying concept of equality is explicitly defined in category theory, but it wouldn't surprise me if it is. If that definition involves the substitution property, then the counter-example presented here says nothing about Set as a functor, but rather that DateTimeOffset has unlawful equality behaviour.

I think this is a red herring. Microsoft can implement HashSet<> however it wants and you can implement your Select function however you want. Then the pair are either a functor or not. Independent of this is that Microsoft gets to define the contract for IEqualityComparer<>.Equals. The documentation states that a valid implementation must be reflexive, symmetric, and transitive but does not require that the substitution property is satisifed.

I think the correct question is this: Is HashSet<> a functor?...which is equivalent to: Does there exist a function such that HashSet<> and that function are a functor? I think the answer is "yes".

Implement Select by calling the constructor overload of HashSet<> that takes an instance of IEnumerable<> as well as an instance of IEqualityComparer<>. For the second argument, provide an instance that implements Equals by always returning false (and it suffices to implement GetHashCode by returning a constant). I claim that HashSet<> and that function are a functor. In fact, I further claim that this functor is isomorphic to the functor IEnumerable<> (with the function Enumerable.Select). That doesn't make it a very interesting functor, but it is a functor nonetheless. (Also, notice that this implementation of Equals is not reflexive, but I still used it to create a functor.)

Tyson, thank you for writing. Yes, I agree with most of what you write. As I added in the P.S., I'm aware that this post draws the wrong conclusions. I also understand why.

It's true that one way to think of a functor is a type and an associated function. When I (and others) sometimes fall into the trap of directly equating types with functors, it's because this is the most common implementation of functors (and monads) in statically typed programming. This is probably most explicit in Haskell, where a particular functor is explicitly associated with a type. This has the implication that in order to distinguish between multiple functors, Haskell comes with all sort of wrapper types. You mostly see this in the context of semigroups and monoids, where the Sum and Product wrappers exist only to distinguish between two monoids over the same type (numbers).

You could imagine something similar happening with Either and tuple bifunctors. By conventions (and because of a bit pseudo-principled hand-waving), we conventionally pick one of the their dimensions for the 'functor instance'. For example, we pick the right dimension of Either for the functor instance. In both Haskell, F#, and C#, this enables certain syntax, such as Haskell do notation, F# computation expressions, or C# query syntax.

If we wanted to instead make mapping over, say, left, the 'functor instance', we can't do that without throwing away the language support for the right side. The solution is to introduce a new type that comes with the desired function associated. This enables the compiler to distinguish between two (or more) functors over what would otherwise be the same type.

That aside, can we resolve the issue in the way that you suggest? Possibly. I haven't thought deep and long about it, but what you write sounds plausible.

For anyone who wants to use such a set functor for real code, I'd suggest wrapping it in another type, since relying on client developers to use the 'correct' constructor overload seems too brittle.

Well, yes, but since you have to implement a proper matching HashCode Function anyway, I thought it would be more obvious to write a matching Equals Function too.

Ah, so you're proposing to subclass HashSet<DateTimeOffset> and pass the proper EqualityComparer to the base class. Alright, that would be a proper Functor then.